At the end of the line-up 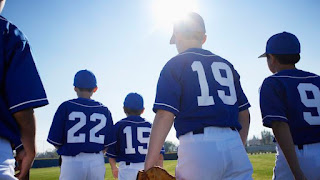 Spring weather is fast approaching, and I am getting anxious. No, it is not the threat of tornadoes. It is the fact that I will be riding my bike in Little Rock by a baseball, softball, and T-ball complex, with all those kids out there getting ready either to impress or embarrass their parents. Yes, it is anxiety producing, and here is why.

As I remember it, it was always a coach who taught phys ed in my high school, and when it came time for baseball or football or basketball, the coach always selected two of the star jocks to captain the teams, and the rest of us got lined up. Then the two stars began alternately picking team members, and the rest of the story causes queasiness in my gut. Jocks picked other jocks first, and the rest of us, whose group photos in the yearbook were on pages listed as Science Club or Latin Club or Honor Society, waited in shameful silence as the line thinned out. Then each team captain would have to think a long time before making the next pick, because now he was down to picking liabilities instead of assets. And that is exactly how we on the sideline felt—like liabilities.

There is nothing quite so embarrassing as being lined up for selection when we realize that we are not going to be anyone’s first choice. There is nothing that so clearly and publicly demonstrates our failings as when the determination is made that we are not good enough and thus we are passed over. And that is exactly why the story of David’s selection is so important in our tradition. It gives hope to those who stand on the sideline.

That is not the way that I originally felt about David. He was, after all, the great king of Israel, the one who brought the nation together and made it possible that his successor could build the Temple in Jerusalem, the one who wrote many of the psalms we still use in church on Sunday. For the early Christian witnesses, Jesus was no less than David’s heir, the heir of David, not some other monarch in the long line of Jewish kings. For the writers of so many Christian hymns, it is David’s kingdom that never ends, especially as evidenced in his descendant Jesus.

But then one day I noticed the beginning of this story. When it came time for Samuel to find someone to anoint as a future leader, David’s own father did not find him important enough to even let him be on the sideline to be reviewed. It had the makings of another horrible phys ed class experience, when those who are not already on the team are made all too aware of their deficiencies. David was on the margins, left out in the pasture to tend the sheep, perhaps because his father was blind to any other way of looking at his family.

Today’s lessons are about hope for the people who are left on the margins. In the case of the story of David, it is about the reality of hope for the child whose own parent apparently can’t see his potential In the case of the gospel, it is about a blind man whom the world would say has no potential precisely because he has a history of blindness. But in both cases, the commonly accepted wisdom is wrong. David fathers a dynasty, and the blind man becomes one of the most eloquent witnesses to Jesus. In both cases, those who were once marginalized become central to the proclamation of the good news that unconditional love cannot be extinguished.

Now, the gospel story is one of the most carefully written among all the Jesus stories. Go back and reread the story at home. The blind man is the very one who eventually comes to see clearly who this Jesus is. For centuries this story was read at baptisms because it shows so very clearly how we who are baptized gradually come to know who Jesus is, first as no more than a name and eventually as the tangible presence of God in the world. It is a story of the marginalized as central to the proclamation of the good news

But the lesson from 1 Samuel goes a step further. Not only is David chosen to proclaim God’s good news. By the end of the story, the very child whose father thinks him unimportant in comparison to his other sons is declared ruddy and beautiful and handsome. In this story not only are the marginalized central in the proclamation of the good news, they are now declared beautiful. The good news becomes that among the marginal there are beautiful people; among the little forgotten ones there is the potential for greatness. God declares beautiful those whom no one else would choose.

Part of the purpose of Lent is for us to take the time to see clearly who we really are. And we do well to remind ourselves that we do not love as we should, that we are deaf to God’s call to serve, and that we are self indulgent, to name some of things we confess on Ash Wednesday. In some ways we have no right to think that we should be chosen first; our performance has been fairly clear. It is sort of like the fact that I need not remind you that there was a reason so many of us were never chosen early on when the teams were forming in phys ed class; we were bad athletes.

But to see who we really are also involves seeing that there is beauty even in the ones in whom the world has little interest, in those whom the world might label as liabilities. In fact, God can use that sort of person more than anyone else to present a tangible picture of unconditional love. God’s love for the perfect would surprise no one. God’s equal love for the last person in line might be the only thing that will shake up humankind to the point that the kingdom is ushered in. God uses young children who have been left out of the picture. God uses blind men who only slowly get the picture. In fact, God declares such people beautiful. And that can be good news for any of us who have ever felt we would never be anyone’s first choice.

Unconditional love takes away the humiliation. Unconditional love stops separating the world into worthy and unworthy. Unconditional love stops the process of having the strongest decide who will be losers. Today the prophet Samuel showed how to play the game: look for the least likely and declare him the handsomest of all. Today the gospel says the man born blind can see more clearly than all the religious professionals. I like that good news; it has a godly wisdom. If we could find a way to translate that wisdom to high school phys ed classes, we might could turn all sorts of sidelines into places of honor.
Email ThisBlogThis!Share to TwitterShare to FacebookShare to Pinterest