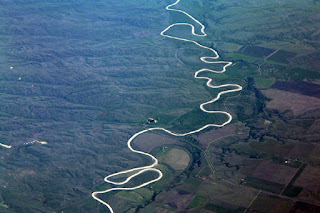 The Mississippi is a grand river. To the east and west of its banks lies an incredibly fertile piece of American land: the Mississippi River Delta. For a hundred miles into the states of Arkansas and Mississippi the Delta wanders, a huge agricultural resource of flat, easily farmed land.

Someone visiting from another planet would assume that the residents of the Delta feast every day on a wide variety of vegetables and fruits,
that the health of its people would be unparalleled, that creation is good. But such an assumption would be wrong.

There are few vegetable and fruit farmers in the Delta. Not many farmers are growing any local varieties of the produce that might fill grocery store shelves. Much of what is available at the store is shipped in from California, food bred for shipping instead of taste and nutritional value. Meanwhile, in the midst of some of the most productive farmland in America, we find food deserts in the Delta, small towns in which it is impossible to find good, local food. We have effectively turned the Mississippi from delta into desert. It is no wonder that small Delta towns are dying.

How might the church help change this situation? How can the church become true to its mission to get out beyond its doors and be in relationship with the community around it? I would challenge church members in both cities and towns to work with people in small towns and on farms in rural areas to start changing both the demand and the supply of locally grown, healthy food. Support physical locations for the sale and exchange of produce that is locally grown. Contact restaurants. In other parts of the nation, restaurants started the push for farmers to grow more tasteful crops. Farmers did so, and subsequently realized that there was a growing demand for such food among people shopping at grocery stores. As consumers became more concerned about the ethics of what we eat, farmers found new ways to make vegetable and fruit production profitable.

This is not a way simply to get more interesting produce on grocery store shelves. If we get more small farmers growing specialty crops, we have a chance to bring new life—and livelihoods—back to the farmers themselves, as they find a new sense of worth in what they do. And it could be a boon to small towns, which may start to re-establish themselves as centers of farm production and places where the next generation of its residents will want to remain, rather than heading off because there are no meaningful jobs locally. The people who live in the area would no longer find themselves in a food desert. Emotional and physical health might improve. It can a win-win for everyone, even for the church, as it finds a new way to show that the sharing of food is central to who we are. It can be our witness to the goodness of creation.
Email ThisBlogThis!Share to TwitterShare to FacebookShare to Pinterest