Diocesan Convention Sermon at the Ordination to the Priesthood of Marna Franson from Micah 6:8 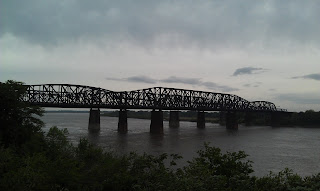 Throughout history, bodies of water have served as clearly defined demarcation lines between one way to live and another. If you don’t believe me, I say somewhat jokingly, simply stand on a levee in the Delta and look toward Mississippi. In the western medieval world, the Atlantic Ocean was the ultimate barrier, as evidenced, at least apocryphally, by those maps that simply stated, “Beyond here there be dragons.” It was a warning to avoid what you did not know; something different and scary might reside on the other side. But water also offered safety, depending on which side of it you stood. For example, in our own country’s first few decades, that same Atlantic Ocean kept us safe from the intrigues that were always occupying Europe. And to our nation’s south, the Rio Grande, as miniscule as it now is, has a history of separating cultures—and languages—just as dramatically as any ocean. In the presence of bodies of water such as rivers or oceans, we tell ourselves stories to remind us which side is safe and which side is dangerous, where we should be and where we should not go.
The prophet Micah, from whose book our first lesson this evening was taken, also knew a thing or two about rivers. He knew of their history as barriers, but he also knew what good and holy things could happen when rivers are breached. Tangible things such as water, seen in new ways, can have new meaning. For proof, look at how we use water as a sacrament.

“Hear what the LORD says: Rise, plead your case before the mountains, and let the hills hear your voice. Hear, you mountains, the controversy of the LORD, and you enduring foundations of the earth; for the LORD has a controversy with his people, and he will contend with Israel. O my people, what have I done to you? In what have I wearied you? Answer me! For I brought you up from the land of Egypt, and redeemed you from the house of slavery; and I sent before you Moses, Aaron, and Miriam. O my people, remember now what King Balak of Moab devised, what Balaam son of Beor answered him, and what happened from Shittim to Gilgal, that you may know the saving acts of the LORD. With what shall I come before the LORD, and bow myself before God on high? Shall I come before him with burnt offerings, with calves a year old? Will the LORD be pleased with thousands of rams, with ten thousands of rivers of oil? Shall I give my firstborn for my transgression, the fruit of my body for the sin of my soul? He has told you, O mortal, what is good; and what does the LORD require of you but to do justice, and to love kindness, and to walk humbly with your God?”  - Micah 6:1-8